The HQS Wellington is the headquarters of the Honourable Company of Master Mariners. You can learn more about its rich history below (or by visiting www.thewellingtontrust.com)

The History of HQS Wellington

It was always the ambition of the founding members of the Company to have a Livery Hall. Up to the outbreak of war in 1939, various proposals were examined, including the purchase of the sailing ship, the Archibald Russell.

After the war, it became apparent that the possibility of building a Hall in the City of London had been rendered very remote. In 1947, the Grimsby class sloop Wellington was made available by the Admiralty. The Company decided to buy her with money subscribed by the Members and convert her to a floating Livery Hall – an appropriate home for a Company of seafarers.

Built at Devonport in 1934, HMS Wellington served in the Pacific mainly on station in New Zealand and China before the Second World War. During the war, Wellington was fitted with two 4.7 inch and one three inch guns. Additionally, anti-aircraft guns were fitted for self defence. Depth charges for use against submarines were also carried. The Wellington served primarily in the North Atlantic on convoy escort duties. She shared in the destruction of one enemy U boat and was involved in Operation Dynamo, the evacuation of troops from Dunkirk. A fuller account of Wellington’s war service has been written by Captain A.D. Munro in his book HMS/HQS Wellington.

A film exploring H.M.S. Wellington. Built at Devonport Dockyard in 1934, H.M.S. Wellington rescued over 450 Merchant Navy seamen and was active at Dunkirk and the North African landings during World War Two. Produced by Maritime Films UK.

She was then converted from being His Majesty’s Ship Wellington to Head Quarters Ship Wellington at the Chatham dockyards. The cost of this conversion was met by an appeal to which Lloyd’s, Shipping Companies, Livery Companies and many other benefactors generously contributed. She arrived at her Victoria Embankment berth in December 1948 to continue service as the floating livery hall of the Honourable Company of Master Mariners.

In 1991 HQS Wellington was dry-docked at Sheerness for three months during which, apart from extensive steelwork repairs and complete external painting, she received a major refurbishment which included the refitting of all toilet facilities, offices and accommodation areas. For the first time, Wellington was fully fitted with custom-made carpet, which added a feeling of comfort and warmth to the ship. This, coupled with imaginative displays of the Company’s marine paintings and artefacts, gold and silver plate, ship models and newly discovered very early 18th century charts, help make the ship a Livery Hall which is admired throughout the City of London. 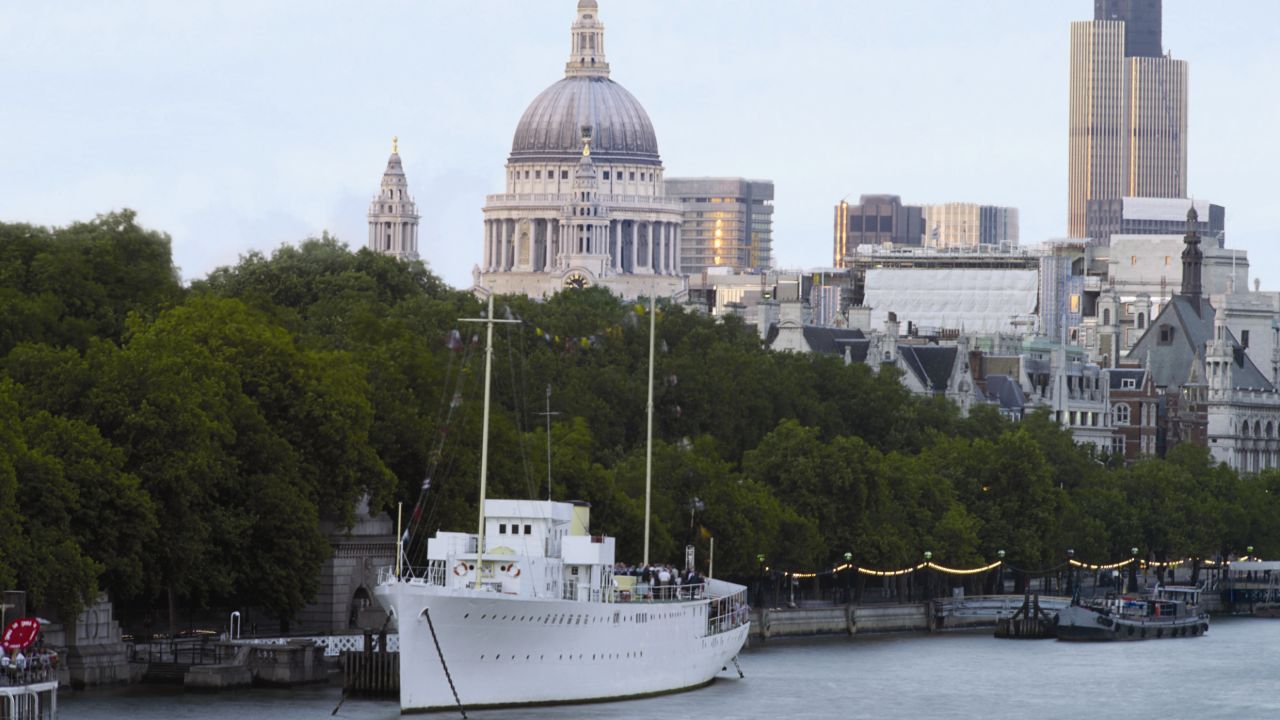 On the 1st of July 2005 ownership of the WELLINGTON was transferred from the Honourable Company to the Wellington Trust. The Trust now focuses on promoting our nation's maritime heritage through its Education Programme. More information about the Wellington Trust, may be found on their web site: www.thewellingtontrust.com.