The Bristol Channel Outport was formed in Cardiff on the 28th August 1964, since then meetings have been held at least annually. In the last two decades with the close of Bristol and Cardiff Nautical colleges and the reduction of shipping into South Wales ports the meetings have become more social functions increasing to four per year.

Our area covers South and West Wales and adjoining English counties including Bristol, Gloucestershire and Herefordshire. We are currently centered in the Cardiff area but hope to branch out to other areas within the Outport boundaries to make our events accessible to all members who wish to attend.

Our functions for 2023 will be; St David’s Day lunch which will be held as close to the 1st of March as possible, the summer visit in May, the Late Summer Buffet in September and the Christmas lunch in December. We are also looking at introducing a new event based around college term times to encourage apprentices and associates serving as cadets the opportunity to attend Outport events.

The Outport tries to maintain per person charges to an affordable rate with Junior Associates and Apprentices still serving as Cadets free of charge. We do not normally invite local dignitaries so as to avoid prohibitive costs. Normal attendance at functions is around the mid thirties.

We have a strong membership of all designations from Apprentices through to Livery.  There are also some 20 regular paying guests and widows from the maritime community. 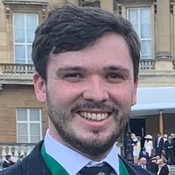 I joined the HCMM as an apprentice back in 2016. Since then I have taken on the role of the Bristol Channel Honorary Secretary. I hope to progress to Freeman by the end of this year. With my work pattern I aim to get to London as often as possible.

I started my career as a cadet with Anglo Eastern onboard PIL container ships. I qualified as an OOW in 2017. Following qualifying I started working on a temporary basis with Svitzer before I was offered a full time position in 2018. Since then I have gained my Chief Mates CoC. After gaining this I was able to use this to progress to trainee master and then Master with Svitzer onboard their tugs. I work predominantly in the port of Milford Haven.

If you wish to contact me in my role as Bristol Channel Honorary Secretary please contact me.

Read more about our Bristol Channel Outport's Visit to the National Coastwatch Institution at Nells Point.