The Technical Committee meets four times per year to discuss issues and problems which have come to light within the maritime industry.

The committee is directed under the chairmanship of Captain Chris McDade CMMar. Mr Andrew Bell is the the Deputy Chairman of the committee, in addition to being the co-ordinator for the Joint Informal Meetings. The secretary to the committee is the Clerk. In addition to the five working groups, the P&T Committee is also made up of a number of appointees to various external committees. 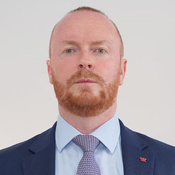 I joined the Honourable Company in 2012 and immediately became involved in both the Education/Training and Professional/Technical Committees to help further promote HCMM within the Maritime Industry.  In 2016, I took Livery and am an active member of the Mentor Scheme as well as being elected a Court Assistant.

I started my seagoing career in 1997 as a Deck Cadet with Mobil Shipping and then moved on to BP Shipping with their LNG Fleet in 2002.  I remained at sea with BP before transferring to upstream operations with BP Angola where I was involved in the construction, commissioning and operation of an Ultra Deep Water FPSO project.  After completing the project in Angola, I moved into Marine Consultancy in Singapore where I was involved in several casualties, offshore construction campaigns and representing finance during the commissioning and start up phase of two LNG Terminals in Eastern Australia.

In addition to the Merchant Navy, I also served as a Royal Navy Reserve Officer for 11 years working with COMATG in the Amphibious Warfare Branch and deployed on LPD and LPH assets in various operational taskings as well as an instructor role.

I moved back to the UK with Teekay Gas as LNG Assurance Manager and since then have headed up Marine HR as well as Fleet Operations before being selected as Vice President, Gas Operations and Managing Director for Teekay Gas.  I am responsible for the operational success of  the organisation with 44 LNG Vessels, 29 LPG Vessels (Joint Venture), 1 LNG Terminal (Bahrain) and approximatley 2500 staff.

I sit on various internal boards with our Joint Venture partners as well as wider industry with SIGTTO, North of England P&I, Class Societies and UK Chamber of Shipping.  I am a Chartered Master Mariner and Younger Brother at Trinity House.